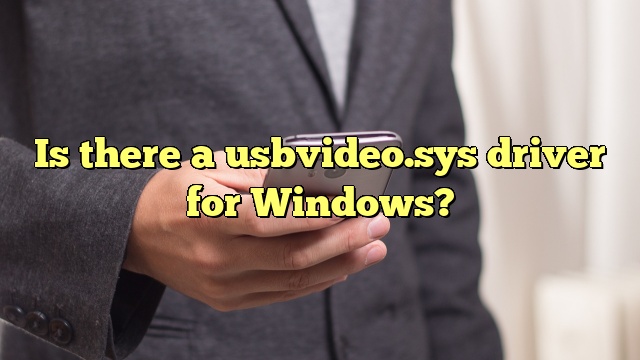 The root causes of SYS BSOD (“blue screen of death”) errors associated with usbvideo. sys include a missing or corrupt Windows Server System 2003 R2 Enterprise Edition or kernel mode driver, faulty hardware, or malware infection. Downloading and replacing your SYS file can fix the problem in most cases.

Malware infection is one of the many common causes of various computer glitches such as the usbvideo.sys error. Malware is expected to infiltrate a computer, change system settings, and corrupt files on multiple levels. When this happens, the Windows® Microsoft® and Windows operating system becomes significantly vulnerable to usbvideo.sys errors and crashes.

Usbvideo.sys can be found in Windows 10, Windows 8.1 and Windows 8. Please start reading to find the correct download for your personal (free) version of usbvideo.sys file, archive details, and troubleshooting instructions for the SYS file.

Is there a usbvideo.sys driver for Windows?

The system-provided USBVideo.sys driver supports the following UVC features on various versions of Windows: You can configure UVC support by providing an extension plug-in. Extenders provide a private edge channel between a device provided by the device manufacturer and the application.

USB Video Class driver files such as usbvideo. sys contains the Win32 EXE (driver) file type in question. They are associated with the SYS file extension developed by Microsoft for the Microsoft® Windows® operating system. The first version most commonly associated with usbvideo.…sys is found in Windows 10, Windows 8.1 and Windows 8.

How do I fix Usbvideo Sys?

USB class video driver files, for example, although usbvideo. are sys and are considered a type because of the Win32 EXE (driver file). They are most likely related to the SYS file movement developed by Microsoft for the Microsoft® Windows® operating system. First version with usbvideo. sys is only found in Windows 10, 8 windows.1 and Windows 8.

How to join SYS databases, sys.tables and sys columns?

The column does not exist in some tables, so the generated counter should not include requests for gloveboxes without this column. To solve this I really need to find a basic way to join sys.databases because of sys.tables and then sys.columns. Or the ability to modify to query all required databases with time-saving depth.